Pizza In A Cone Goes Viral: Twitter Has Mixed Thoughts About The Unique Treat 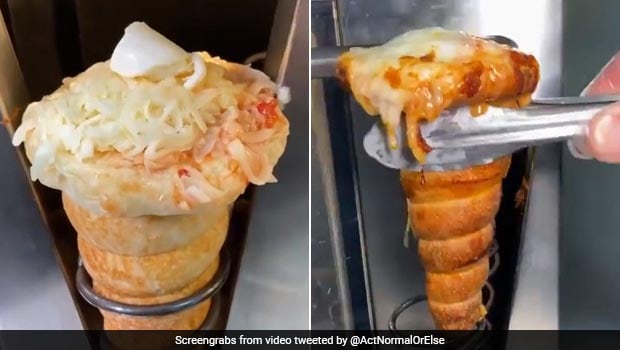 There are few dishes as universally delicious as a pizza. Whichever corner of the world you may travel to, pizza is one treat that will never disappoint. The combination of tangy Marinara sauce with oozing cheese topped on the crusty dough – there’s never a bad time to eat a slice of pizza. Recently, a unique treat was created with the flavours of pizza in mind – the pizza cone. Rather than the usual pizza slice, this is a conical structure made with pizza dough and the fillings stuffed inside it. Take a look:

Shared on Twitter by @ActNormalOrElse, the video has received over 200k views and counting. First, cones were created with the pizza dough. Then, these cones were filled with Marinara sauce and cheese and then baked to cook everything properly. Another version of the pizza cone was filled with tossed vegetables in a cheesy dressing.

Twitter users had mixed thoughts about the pizza cone. While some wanted to try it, others felt there was no need to make such a dish in the first place. Several also pointed out that the filling inside the pizza cone would be extremely hot and may burn the mouth.

How are you supposed to eat it? Why not just eat pizza?— Chris Paul Towers (@CTowersCBS) August 30, 2021

But pizza isn’t that hard to eat with one hand already. Especially after a cold. This solves a problem we simply don’t have. Those scientists should be working on a French Onion soup cone instead.— Stephen V Liu (@StephenVLiu) August 30, 2021

We simply do not have the technology— Amanda Mull (@amandamull) August 30, 2021

It doesn’t make much sense except as a novelty. Since it’s a cone each bite has a much different crust to cheese to sauce ratio, the cone will ooze sauce and cheese everywhere since it’s not a solid and you’ll end up loosing half of it if you don’t eat it fast enough, and— Chad ????????✊ (@BirdUnban) August 30, 2021

TBH, this isn’t the worst thing I’ve seen on my timeline in an era where big media tries to promote eating bugs all the time.

Why would someone do that when pizza already comes as a cone? pic.twitter.com/L2gX1QnnnH— Tif (@UnionAutomata) August 30, 2021

the whole point of pizza is that it’s a few great flavors in an extremely convenient format. why complicate it!— kim possible facts (@kimpossiblefact) August 30, 2021

imagine if you made this with dessert! i think it would rule— Crowsa Luxemburg (@quendergeer) August 30, 2021

(Also Read: Did You Know Maths Could Get You More Pizza Per Order? Here’s How)

Would you try this unique pizza cone? Tell us what you think in the comments below.