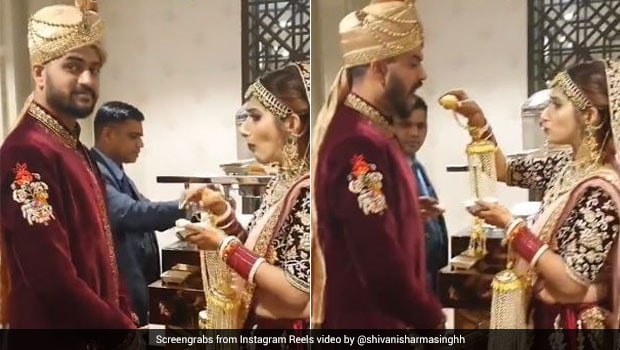 A video of a bride tricking the groom while eating pani puri is going viral on social media. The footage shows the bride taking the mouth-watering puri, filled with stuffing and the tangy water, towards the groom and as he opens his mouth to eat it. Then she immediately moves the puri away from him and eats it herself, leaving the groom longing for his turn. As he prepares for another round, hoping this time he would get to relish the mouth-watering dish, but the bride ensures he remains longing for it. Take a look at the viral video:

The video has received over 1.2 million views on Instagram and over 101k likes since it was shared. “I feel so bad for Tarun, look at him,” wrote the bride in the post. She was not alone feeling sorry for the groom, many people who commented on the post too felt the same. “This is atyachaar (torture),” said Anshuman Sood. “Pani puri bhi rakhna hai valime mein [I will keep pani puri in my wedding],” said Mohammed Fahad.

One of the most popular street foods in the country, Pani Puri always makes people want it more. The small, round and crispy Puris can be stuffed with almost anything mashed and sprayed with chilli powder and other spices to draw people towards it. They can be made of atta as well as sooji. Some people say the best way to enjoy the tanginess of the green water prepared for it is to not accompany Pani Puri with anything else.

Enjoy the goodness of this street-style snack at home. Photo: iStock

You can replace the water with chutneys (tamarind) and use mashed potatoes (either fried or boiled) for fillings. If you want you can get creative and prepare the filling with paneer or any other vegetable of your choice as well. Also known as golgappa and Phuchka, this street food can be eaten with whipped and salted curd.

Recently, an adorable video of a couple had surfaced online. The groom was lovingly feeding Pani Puri to his new wife. What do you think of these cute videos? Tell us in the comments below.

Lasaniya Batate: Make This Gujarati Potato To Spice Up Your Boring Meals